I love potatoes. Scalloped, mashed, French fries, baked. Anyway you cook them, I’ll eat them. But above all else, I love potato chips. So when I spotted Lay’s Passport to Flavor chips, I had to try them out. There are four new global flavors released to coordinate with the Olympics. Let’s get to munchin’.

The first flavor is Greek Tzatziki. Tzatziki is a yogurt sauce with cucumber. It’s very good. When I initially tasted this flavor, I was disappointed. However, once I tried it again with a chicken sandwich, the flavor become more vibrant.

There is a heavy dill taste which is a slight turn off for me. Overall, the wavy chips taste like sour cream and onion with a kick.

Next up is Brazilian Picanha which is steak and chimichurri sauce. Chimichurri sauce is primarily made of red wine vinegar, salt, pepper, garlic, parsley, and lemon juice.

These chips had a subtle taste which was composed of beef and garlic. The flavor is a bit understated which is good for someone looking for a mild tasting chip.

Szechuan chicken is my favorite Chinese dish, so I had high hopes for this flavor. There is a lot of seasoning on these chips. I could taste the Szechuan pepper, but that’s it. I expected to taste chicken or maybe green pepper.

I expected the chips to taste like the box of Szechuan chicken on the front of the bag. In the end, the chips had a kick to them like hot barbecue chips…without the barbeque. 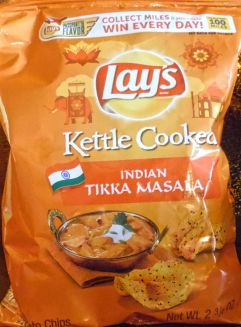 And lastly, there is the Indian Tikka Masala flavor. This is a powerful flavor loaded with coriander and turmeric. The chips are kettle cooked and orange from the  seasonings. The crunch of the kettle chips along with the strong complex flavor really caught my attention. There was even a deep smoky flavor courtesy of the cumin.

So which flavor was my favorite.

I chose the Indian Tikka Masala because I’d never tasted a potato chip that was even close to this flavor.  It’s a unique and sophisticated flavor, which is a good representation of Tikka Masala.

Well, that’s my opinion. Grab some bags of these global flavors and see which ones you like the best.

This site uses Akismet to reduce spam. Learn how your comment data is processed.